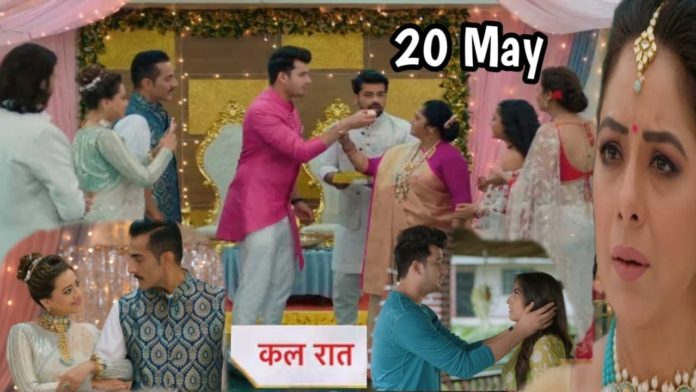 There is a lot of uproar in the TV show Anupama. After the divorce in the show, the track of engagement of Nandni and Samar is now being shown. Know what will happen in today’s latest episode. After getting divorced, Anupama has decided to stay away from Vanraj. Kavya takes responsibility for the entire house. Samar and Nandni are also to be engaged today. There will be a big uproar.

Eventually, Anupama and Vanraj are divorced. After the divorce, Anupama is staying away from Vanraj and their family. After which, Kavya is seen stepping into the house. Bau and Vanraj are very angry with Anupama’s behavior. At the same time, everyone in the house is very upset about the engagement of Samar and Nandni. Let us tell you what will happen today in today’s episode.

Kavya made a place in the kitchen
As soon as she wakes up in the morning, she sees Anupama’s name; she sees that Kavya is standing in the kitchen. Kavya says that by taking a bath, she has set foot in the kitchen and has also made prasad. Everyone comes out after hearing the voice and starts looking at Kavya. Kavya tells everyone that she has made tea for everyone. Everyone sits down. In such a time, Anupama also comes out and is happy to see this. Pakhi asks Anupama to sit in front of them so that everyone feels that they have drunk tea with them.

Vanraj’s anger over Anupama
Vanraj, who drinks tea, gets knocked down due to a cookie. Vanraj starts coughing fast, and everyone runs and brings water to him. But Vanraj’s cough does not stop. Seeing this, Anupama comes running and starts hitting on Vanraj’s back vigorously. After which, Vanaraj recovers. Anupama teaches Kavya not to give the cookie to Vanraj any further, and if so, then fix them like this. Seeing this, Vanraj shouts angrily at Anupama. After which, Anupama reminds Vanaraj about the first night of their divorce. In which he said that he is concerned about the whole family. She says that as a mother, she would come into the house.

Uproar over Samar engagement
Samar and Nandani are going to be engaged. In such a situation, after getting divorced from Anupama, the whole house is upset and depressed. In such a situation, when Anupama goes to argue with Vanraj. So the boy seems quite annoyed by Anupama’s behavior. After which all start to listen to Anupama. Samar angrily tells the whole family whether someone will come or not, she will remain engaged. There is a lot of debate between Vanraj and Samar.

Samar-Nandani hides a secret from family
While the whole family is upset, on the other hand, Anupama has started preparing for the engagement. Anupama calls Doctor Advaita in the engagement. On the other hand, Nandni talks to Samar and says that she should tell her secret to everyone. She does not want to hide anything from anyone. At the same time, Nandni says that it is like lying to all. She looks at the box and starts wondering what the two are hiding.

Annoyed by Samar and Anupama’s talk, Baa says that she will not go to Samar’s engagement. Pakhi and Sweety convince Baa, but she angrily scolds them both. During this, Kavya tells Anupama that Baa is angry and she does not want to get engaged. Anupama is shocked to hear this and reaches her nearby to convince Bau. Anupama celebrates Baa, but Baa closes the door upon seeing them and walks away. In the engagement, everyone is shocked to see Bow and reaches him. Seeing which Baa is quite surprised.