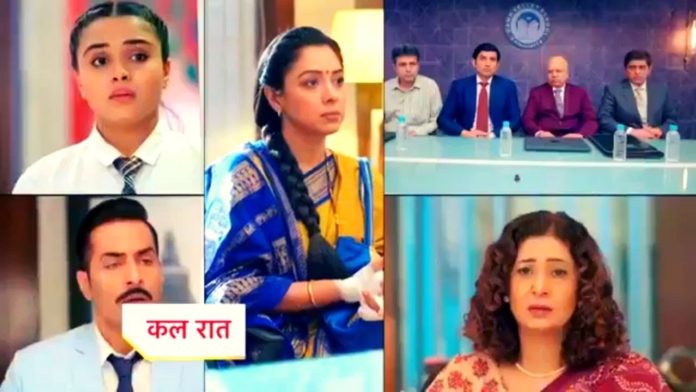 Anupama viewers get to see one twist after another. Anupama courageously saves the children from the fire, but the principal insists on taking responsibility for it. Anupama decides that she will bring the negligence of the school to everyone.

In today’s Anupama episode aired on 13th February 2021, it will be shown that Anupama has a meeting with the trustees of the school. During this period, Vanraj also happens to be with him. All the people of the trustee ask him many questions one by one. Every time those people say that there was a fire due to his negligence. Every time those people try to stop Anupama’s voice, but she says that those people should say anything, she is not going to lie and will not take this charge on her head.

The people of the principal and the trustees ask him if you have any proof to know that you have not made this mistake. Anupama gives them a pen drive and says that you can see all the truth in it. She says that you can take her out of a job, but there is no fault for her daughter. So do not remove them from school.

Anupama threatens those people and says that if her daughter is removed, she will bring the school into disrepute. After that, the children who Anupama saves come there and tell everything to those people. After listening to all the things, Anupama’s job is held, and she is not removed from school. Everyone is pleased to know this at home.

In the last episode, you saw that Pakhi tells the family members that in that paper, it is written that Anupama’s mind is not well, and she was upset for some days. This accident happened due to his negligence. Anupama says how she will proof in 24 hours. Summer says that the children will help him. Here Anupama, Samar, and Nandini go to some parents and talk to them. It tells them that they fought against the school, but they refuse.
https://www.youtube.com/watch?v=I8GNvJnmcoo