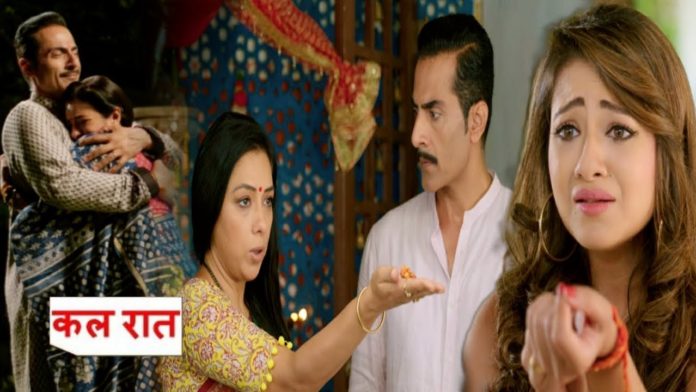 There are a lot of twists in the latest episode of Anupama. In today’s episode, Vanraj and Anupama have a conversation about divorce. In which Vanraj talks about changing the decision to divorce Anupama. At the same time, before the morning of the divorce, Anupama thinks about the moments spent with Vanraj and the whole family and cried a lot. Let us tell you whether Anupama and Vanraj will really get divorced.

Bau explained to Anupama
Troubled about getting divorced, Bau convinces Anupama to change her decision to get divorced. Bau tells Anupama how people will taunt and misunderstand her after getting divorced. Bob says that even after years, society considers women to be wrong. After listening to which Anupama says that she knows what she will have to endure next. Anupama becomes very emotional after seeing her children with her family. She cries while sitting alone and thinks about all her family members, and cries a lot.

Anupama-Vanraj’s beautiful moments
Anupama remembers all the moments she spent with Vanraj before the dawn of divorce. In which she sees how Vanaraja was blackened, having fun with her on a bike. Along with the beautiful moments, Anpuma suddenly remembers those days too. In which Vanraj kicks them out of the house. All the moments of Vanraj with Kavya and how their lives change at the moment turns to divorce. In today’s episode, Anupama drowns in all the moments spent with Vanraj. She cries a lot after remembering those.

Vanraj added hands in front of Anupama
Vanraj comes to Anupama and asks her to change her decision to divorce. Vanraj says to Anupama that whoever has not bowed his head in front of anyone till now is folding his hands in front of him. Vanraj explains to Anupama that he cannot leave her alone in these conditions. Vanraj falls into Anpuma’s feet and folds her hands, and asks her to change her decision to get her divorce for her children and family. After which, Vanraj hugs Anupama. Seeing whom Anupama is left stunned with tears in her eyes.

Kavya got angry seeing Vanraj-Anupama
On the morning of the divorce, Anupama begs God and asks him for courage, and Vanraj is also seen with him while performing the puja. Seeing Anupama worshiping, the whole family comes to her. Seeing which Kavya is very infuriated, and she asks Anupama if they changed their decision. It is shown in the episode that Vanraj hugs Vanraj after listening to what Anuraj said to Anupama last night.

After which, Vanraj tells the whole family that ‘he and Anupama talked last night that he will not get divorced yet.’ After which, the twist comes in the story, and Anupama says that ‘she didn’t say anything, she just kept listening. Anupama tells Kavya that she has broken the thread because she will fulfill her promise today. She will divorce Vanraj. Whose family and Vanraj are shocked after hearing that.