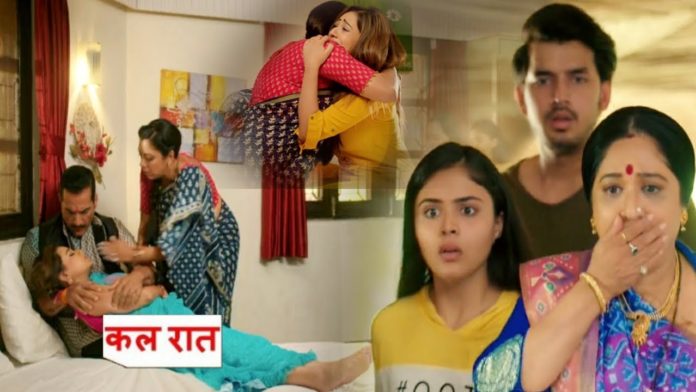 All eyes were on the divorce of Vanraj and Anupama in the TV show Anupama. At the same time, Kavya tries to commit suicide by getting upset about Vanraj’s divorce and the matter of marriage. Anupama and her whole family get shocked and upset after seeing this. When Kavya regains consciousness, so she gives the reason for Supa to Anupama. Anupama is shocked to hear that. At the same time, the episode shows how Vanraj and Anupama’s divorce saddens the whole family.

Kavya explained the reason for attempting suicide
After regaining consciousness, Anupama expresses her displeasure at Kavya. At the same time, the doctor advises Advaita Kavya to leave him alone and rest. Then Kavya asks Anupama to stop with him. After everyone has gone, Kavya tells Anupama that ‘Vanraj has refused to divorce and marry her. After hearing that, she gets distraught, because of which he took this step. After listening to that, Anupama tells Kavya that she has faith. ‘

Anupama warns Vanraj
Anupama gets very angry with Vanraj after listening to Kavya’s condition and words. She comes to everyone and asks Vanraj why he told Kavya that he did not want to get divorced. After which, Anupama reminds Vanraj that he has to go to court the previous day and get a divorce. At the same time, Anupama tells Vanraj that she always tried to kick him out of his life by hitting him. At the same time, they should not force them to do this thing. Anupama says that he can only do so much for Kavya and her.

Vanraj apologizes to Kavya
Vanraj goes to Kavya and starts apologizing to her. He tells Kavya that whatever he has in his heart, he has said. At the same time, Kavya also says that what came in her heart. He said that. Kavya tells Vanraj that if she does not have it in her life, she does not know what she will do. Kavya promises Vanraj that she will become the same as before. Kavya says that they are just waiting for her and Anupama’s divorce.

Tomorrow morning, i.e., on May 12, Vanraj and Anupama will get divorced. Thinking this, Tosho, Boy, and Sweety get very upset. Bau cries to Sweetie and Tosho, saying that as long as Anupama and Vanraj were together. Till then, there were festivals every day. Even after a million attempts, she could not stop the relationship from breaking up.

Both Anupama and Vanraj are waiting for 9 a.m. The whole family is heartbroken about this. The parents’ divorce deeply saddens Vanraj and Anupama’s three children. Pakhi says that the last of them is going to be divorced. She will stay away from them. Thinking of this, the three siblings start crying and hug each other. On the other hand, Vanraj also sits alone, thinking that Kavya wants marriage and Anupama divorces. In such a situation, they will have to take the final decision.

Anupama kept the party
Anupama holds a small party for all, seeing the whole family unhappy over the matter of divorce. In which she tells Bau that it is a palm night. In which they have to live with happiness. Sitting with the family, Anupama sees all those moments of life. In which she and her entire family were happy.