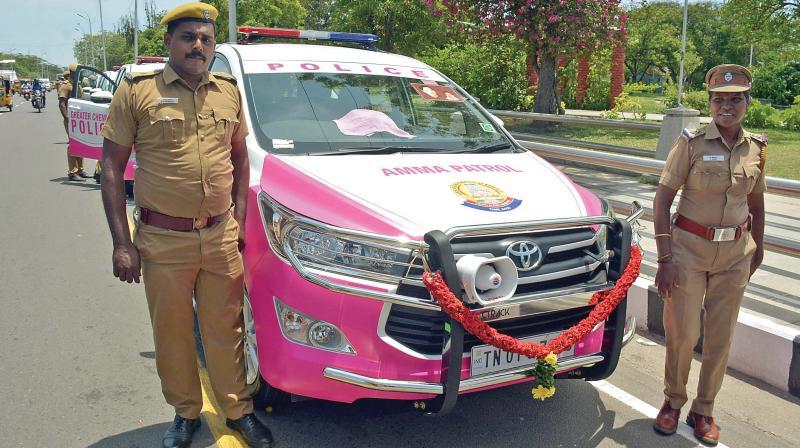 ‘Amma Patrol’ The new pink surveillance vehicles operated by women police officers will be equipped with state-of-the-art facilities to help in aiding women and girls launched in Chennai, Tamil Nadu. Tamil Nadu Chief Minister Edappadi K Palaniswami launched the new women-friendly pink patrol vehicles (Toyato Innova Cars) to the existing patrol cars to aid in increasing safety for women and girls in the city. The launch of new patrol vehicles was a part of a slew of inaugurations and unveiling that the Chief Minister undertook on Monday before he left on his fortnight-long US-UK tour.

‘Amma Patrol’ will exclusively attend problems related to women and girls and provide ready response at the scene of crimes against women and girl children. The Chief Minister launched a batch of 40 new vehicles purchased at a cost of Rs 6.8 crore taken from the Nirbhaya Fund. The Nirbhaya Fund was constituted by the central government after the 2012-Delhi gang rape case. States could plan and implement schemes which improve women’s safety in cities using the Nirbhaya Fund, the cost of which will be shared by the Government of India and the state governments in a 60-40 ratio.

The Amma Patrol vehicles, named after late CM Jayalalithaa who was popularly referred to as Amma, will be operated in areas where crimes against women have been reported earlier. The vehicles have been equipped with revolving lights, sirens, GPS etc to improve communication and visibility. GPS tracking devices and cameras have been installed in its front and rear sides, and these send continuous visuals to the police control room. Personnel in the control room can monitor the visuals and take necessary steps to deploy additional personnel to the spot.

The Government of Tamil Nadu set up a ‘Crime against Women and Children (CWC) Wing’ under the leadership of ADGP Su Arunachalam in March, to supervise all cases of crime committed against women and children. They will be responsible for supervision of ‘Amma Patrol’ vehicles too.