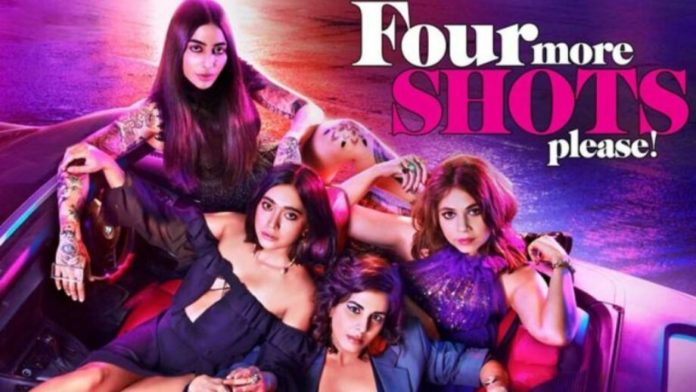 Four More Shots Please was widely accepted as a coming of age story which broke stereotypes associated with womanhood. The Amazon Original series second season will release on April 17th 2020. Directed by Nupur Asthana and written by Devika Bhagat, the show is produced by Pritish Nandy Communications Ltd and is created by Rangita Pritish Nandy.

Anjana and her ex-husband seem to have come back together to have sexual encounters. She is struggling in a male dominated profession and puts her foot down. Damini writes a book worried that it won’t get published. Umang is on a high professional and personally. Siddhi is on a discovery of her own. One year ago she was a virgin who had no sexual experience but today she is on the prowl. She even asks her high society mother what her sexual fantasy is.

Four More Shots Please is the narrative of four friends, who met at a bar and formed a bond so strong that they become one another’s backbones. The story follows media executive Damini ( Sayani Gupta), lawyer and working mom Anjana (Kriti Kulhari), fitness instructor Umang ( Bani J) and the spoiled child of the group Siddhi (Maanvi Gagroo). The show deals with Damini’s demanding profession and need to find solace, Siddhi’s elite socialite mother who wants to maintain social status, Anjana’s struggle to move past her divorce and co-parent and experience being a bisexual woman.

Four More Shots Please Season 2 is releasing after a year of the previous season. The makers have taken it a notch higher and the show has a huge fan following. But the major issued faced nowadays by web series is the online piracy problem. The release of Four More Shots Please on Tamilrockers, the nations leading torrent site for series, movies and shows leaked the full web series prior to its release. Tamilrockers allows free download and streaming of shows.

Four More Shots Please has its loyal followers who will opt to watch the show legally. Another aspect that should be taken into consideration is that in such times many people have opted for subscription of OTT platforms for the sake of entertainment purposes. They will prefer to make use of the money spent rather than searching for a pirated mere 480P or 720P print version of the show.