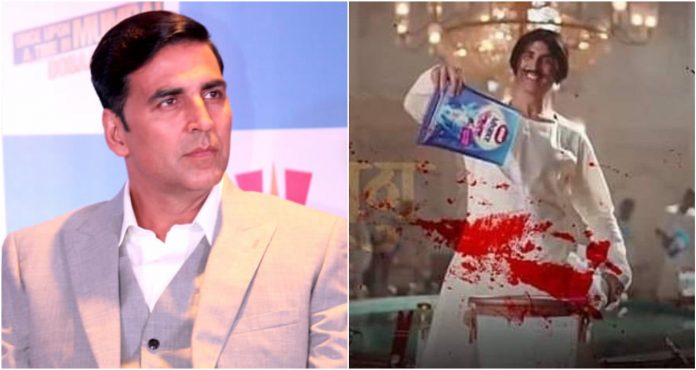 Actor Akshay Kumar is currently very happy with his film Good Newwz. Good Newwz has earned around 156 crores till date. Akshay is a person who stays in the limelight due to problems other than his films. This time he is in discussion due to the clarification of a washing powder advertisement.


Akshay is seen washing dirty clothes dancing for Nirma washing powder in this Jahirat. Akshay Kumar and his companions have worn the garb of the soldier in this Jahirat, and this Shivprami is not liking it at all. This jirat has insulted Shivaji Maharaj. Due to this, Akshay Kumar is demanded for an apology.

In this Jahiraat it is shown that Akshay has returned by fighting and announcing the celebration. Then a queen says that the clothes have been so dirty, we will have to wash them worn out. In response, Akshay says that Maharaj’s army knows not only to wash enemies, but also clothes. “After that all the soldiers start washing clothes.” Shivaji’s patrons are very angry with this Jahirat and #ApologizeAkshay is trending on Twitter.

Chhatrapati Shivaji Maharaj has been insulted by this incident. Today it’s Maharashtra because of the sacrifices of millions of Shivaji’s soldiers, has this been forgotten by Akshay Kumuar? People are even demanding for his arrest and apology.