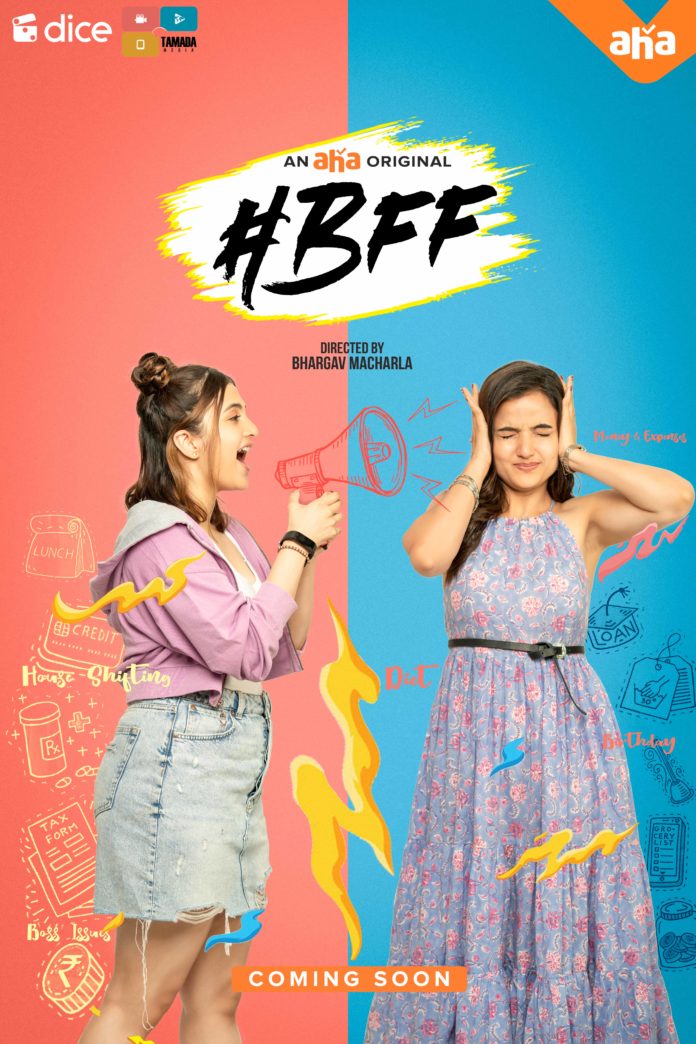 Hyderabad, 13th May: aha, the leading regional OTT platform in Telugu states and Dice Media, long-form premium storytelling platform by Pocket Aces, collaborate for the second time after Alludu Garu for the launch of a coming age web series #BFF. The new series is a remake of Dice Media’s popular series ‘Adulting’ that has seen 3 successful seasons.#BFF captures the journey of two unapologetically imperfect women trying to handle the responsibilities of being independent adults in today’s urban Hyderabad. This aha original series is all set to premiere on 20th May 2022.

In the midst of life’s ups and downs, successes and failures, the two best friends are bound by a friendship that makes for their safe space, as they navigate through the customary problems of adulthood. With a twist of humour, #BFF presents the financial struggles, social validations, parental expectations and other adulting issues that one commonly goes through their early twenties and thirties.

Aha, along with Dice Media and Tamada, brings the edgy and fun series that will take viewers on a roller-coaster ride through the lives, love, and ambitions of these two women who choose to take the less travelled road. The series starsSiri Hanumanth and Ramya Pasupuleti as Nithya and Tara, who navigate their everyday lives to discover what makes it through adulthood in their unique way. The show also includes actors such as Praneeta Patnaik (C/O Kancherpalam fame) and Anjali (I dream fame).

Sharing the motivation behind the series, Ajit K Thakur, CEO, aha said, “We are thrilled to present #BFF, a female-centric story of two women, their life choices, crises, and high points, helmed by their rock-solid, life-saving friendship. The series reflects the voice of the generation of current women who are independent in mind, body and thought. It’s a story that hasn’t been told yet in Telugu states, and we’re glad to have the perfect partners in Dice Media and Tamada bringing this series to fruition. We hope youth, our subscribers and the novel audience would be able to relate to the series.”

Commenting on the launch of #BFF, Sarjita Jain, Showrunner, Dice Media was thrilled to share that, “Every series we create is extremely close to our hearts, having seen it come to life from scratch. When a content IP is auctioned for adaptations, it further builds our credibility, a testament to the series’ success, and we are overjoyed to watch our content appeal to audiences beyond regions across the country. Further, we are certain that a trusted player like aha will do due justice to the series’ picturization and characters, staying true to its storyline and retaining its core essence. We’re thrilled to watch our content baby ‘Adulting’, be reborn as #BFF.”

With an intriguing storyline and starry cast associated with the series, aha planned a watch party for the media and selected Telugu social media influencers at Air Live, Hyderabad, on 12th May. The cast and crew were on top of the world as aha hosted the watch party across mediums. On occasion, Siri Hanumanth, who essays the role of Nithya, said, “I always try to do something new which excites me as well as my fans. I feel it was destiny that today I could play the role of Nithya in #BFF. It is a novel role in the Telugu OTT platform, and I am sure everyone will relate to my character.”

Ramya Pasupuleti, who plays the role of Tara, commented, “I’m delighted that I have shared screen space with experienced actors. I have learnt so much from them, and I hope I can win the hearts of many through this character.”

The ultimate celebration of life is here, and the series is set to premiere on 20th May only on aha. Do not miss to watch it!