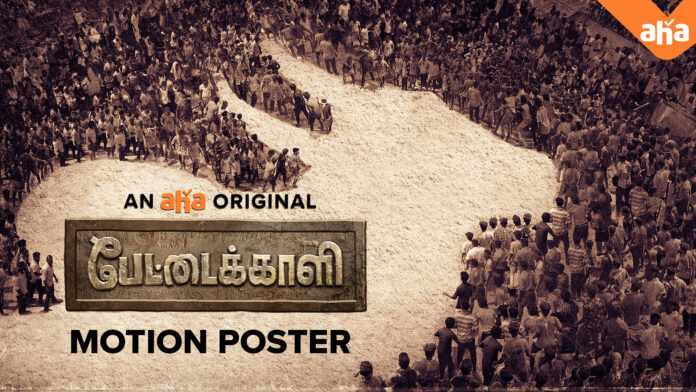 Chennai, 29th September: aha Tamil, which has delivered a slew of promising original series based on unique content and engrossing package, is all set to offer yet another engrossing series titled ‘Pettaikaali’, based on the world of Jallikattu. Collaborating with iconic Vetri Maaran, one of the finest storytellers and filmmakers in the Indian film fraternity, the premise of this series will take the audience deep into the never-seen-before world of Jallikattu. Besides, the title has created a massive lease of inquisitiveness on who’s that Pettaikaali?’ (Yaaru Andha Pettaikali?).

The web series has been crafted and created with the utmost craftsmanship of the cast and crew that will be an amalgamation of an engaging and gripping tale. While Vetri Maaran is the showrunner of this series, ‘Pettaikaali’ is directed by his long-time assistant Raj Kumar. Santhosh Narayanan composes the music, and Velraj handles cinematography. GV Prakash Kumar has launched the motion picture on 28thSeptember, 2022.

Pettaikaali will be the first-ever web series to be made based on Jallikattu. With promising technicians like Santhosh Narayanan and Velraj involved, the web series will offer an enthralling experience for the audiences. The details about others in the cast and crew will be revealed soon.

Launched in 2020, aha is an Indian video-on-demand streaming service that provides 100% local entertainment.  It started out with a 100% Telugu OTT and witnessed great success across the world with its extensive content slate that includes original programming of web series and movies, with a new release every Friday. Fulfilling its promise of 100% Local entertainment, aha has recently launched aha Tamil which has 100% Tamil Web series and movies. aha is owned by Arha Media & Broadcasting Private Limited, a joint venture by Allu Aravind (Geetha Arts) and My Home Group. aha creates original Telugu content across various formats that include movies, web-series, and non-fiction shows.