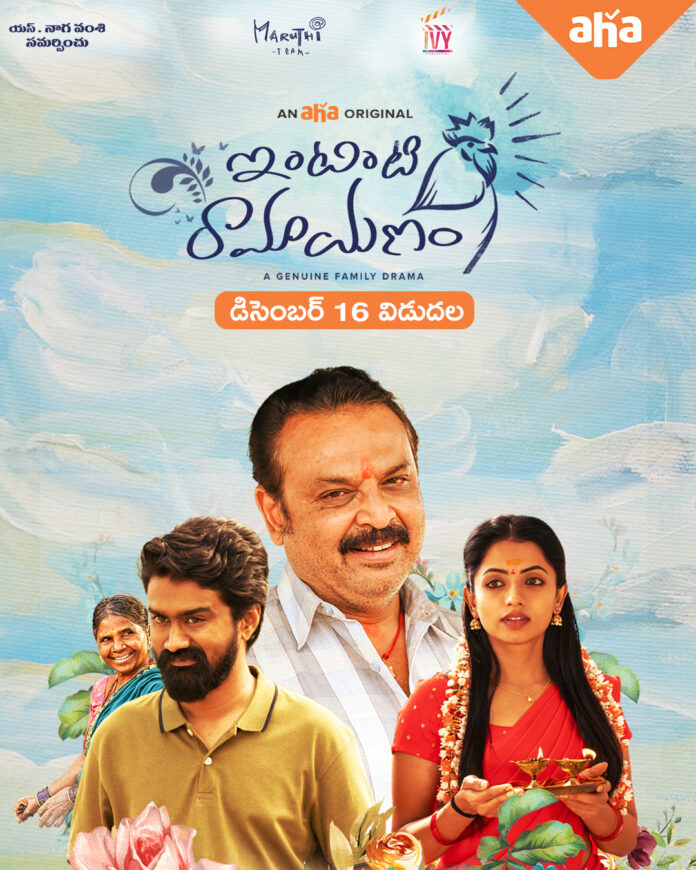 Hyderabad, 21st November: aha, one of the most loved 100% local entertainment destinations, announced its latest aha Original film, ‘Intinti Ramayanam’. Featuring an exceptional ensemble cast, including Naresh, Rahul Ramakrishnan, Navya Swamy, Gangavva and Bithri Sathi in prominent roles, the film has been directed and written by Suresh Naredla will be released on 16th December. Produced by the makers of the popular movies ‘DJ Tillu’ and ‘Bheemla Nayak’ under the banner ofSithara Entertainments are set to debut into OTT with this film.

Intinti Ramayanam is a tale that refers to the familiar beats in middle-class Indian rural life. Set backdrop against Karimnagar, the close-knitted family of Ramulu (Naresh) to doubt each other when they suddenly face a problem, and their hidden motivations and ambitions surface and create a domino effect on family members. Intinti Ramayanam will premiere on aha in Telugu very soon, and the digital streaming platform has launched the film poster on 21st November.

Commenting on their OTT debut, Suryadevara Naga Vamsi, Sithara Entertainments said, “The movie is a labour of love for all of us, from the wonderfully talented cast to the hardworking crew, each of whom has done their best to bring this amazing film to the audience. Our latest film, an aha original in Telugu, Intinti Ramayanam, is a story with intricate storytelling, interspersed with human emotions and several life lessons that continue to be with the audiences long after they have finished watching the movie. It’s a familiar world; however, nothing is quite as it seems.”

Intinti Ramayanam will join the binge worthy shows and movies in the aha catalog. These include films such as Color Photo, Bheemla Nayak, DJ Tillu, Krack and shows such as Unstoppable with NBK 2, Dance Ikon, Telugu Indian Idol, and web series like Anya’s Tutorials, Geetha Subramaniam, 11th hour and much more further buttresses aha focus on providing a multitude of choices to spend quality time and be entertained whenever and wherever.