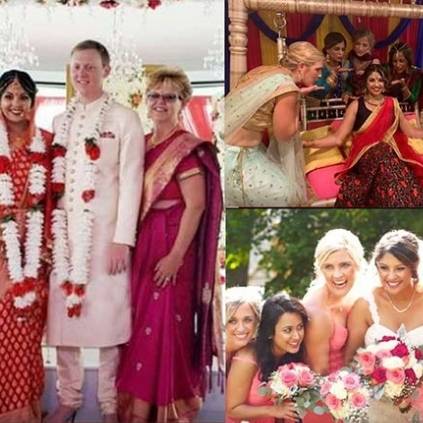 
Richa’s role in the critically acclaimed role in Selvaraghavan’s Mayakkkam Enna with Dhanush in the lead has left a lasting impact on Tamil audience’s mind and her role in Simbu’s cop-drama Osthe is memorable. The model/actress stopped acting in Indian cinema after the 2013 film Bhai and she announced her engagement with then-boyfriend Joe in January 2019. Richa had met Joe in her business school.

And now, the Indian-American actress has seemingly tied knots to her long-term boyfriend in both Hindu and Christian traditions. Even though there is no official word on it, the pictures have been making heavy rounds on the internet. We TheNewsCrunch wishes her a happy married life.

An official statement from Richa “Thanks everyone for the kind wishes ????????. Married a little over 3 months to the love of my life and couldn’t be happier. We were grad school classmates (not college, which in the U.S. exclusively means undergrad), and the only two in our MBA cohort of 140 students that never spoke a word to each other till the second year of our program ????. You just never know when your soulmate will be standing there right in front of you, without even knowing it at first ;). Opposites do attract! Had a beautiful 4-event Indo-American ceremony, across the country in Michigan where I grew up (not sure where “secret love marriage” came from in some of these articles!) with all our friends and relatives from both sides. Blessed to have married into such a wonderful family, and Joe is pretty lucky to have doting in-laws as well!! Lucky to have nothing short of a fairy tale wedding and love story.

It’s crazy to still receive so much support and love from you all even after having left the film industry 6 years ago to pursue other career interests! Will always be grateful. Happy Holidays everyone and all my love”

Thanks everyone for the kind wishes ??. Married a little over 3 months to the love of my life and couldn't (cont) https://t.co/N7kZJvSf8h