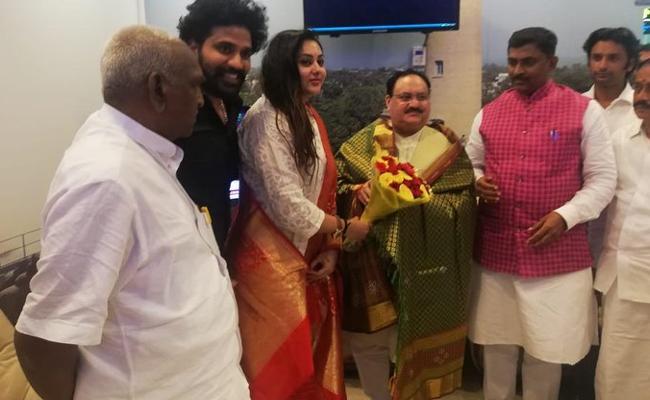 South Indian actress Namitha joins BJP Tamil Nadu in front of the working president JP Nadda. Actress Namitha initially joined AIADMK after her marriage and was one of their star speaker. Now she had left the party to join BJP along with her husband. Former BJP leader and veteran Pon Radha Krishnan was also present during her joining ceremony. Namitha is welcomed into BJP Tamil Nadu where they lack star speakers. She along with Radha Ravi have joined BJP in Tamil Nadu on the same day 30th November 2019.

Namitha was last seein Bigg Boss season 1 Tamil where she wooed audience with her honesty and people were able to see her other side which was genuine and straight forward behaviour. Namitha was recently on news for losing oodles of weight and getting fit. Now she will be one of the speakers for BJP and this would help them to woo large crowd in meetings. Namitha will be addressing a press meet shortly where she will be sharing her views on why she joined Bharatiya Janata Party.

BJP National Working President JP Nadda on Saturday laid the foundation stone for party offices in 16 districts and said Tamil culture gave direction not only to those living in the state but also to people living across the country.