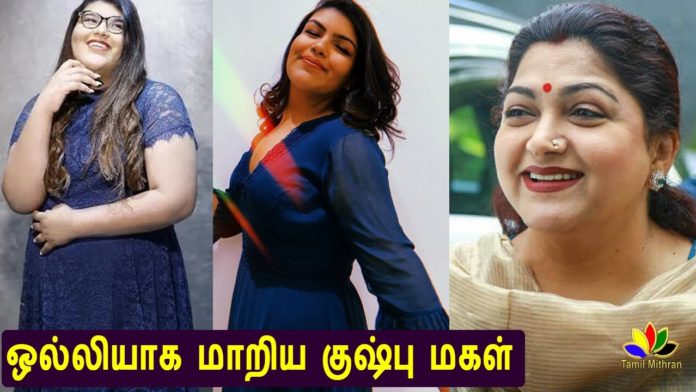 Actress Khushbu is the flag bearer in Tamil cinema. That level of beauty and talent. She has acted in many languages ​​like Tamil, Kannada, and Hindi and is still busy with movies, web-series, and TV shows. She is also known as a prominent figure in politics. But the Sundar C and Kushboo’s two daughters are also the subjects of occasional controversy on social media.

The reason is that unlike the actress Khushboo, some of her fans teased that her two daughters are overweight. Actress Khushboo is currently posting a photo of her second daughter, Anandita, on Twitter. It shows her transformation into a diva by losing weight. Netizens who saw this are liking, and the photos are going viral on social media.

Actress Khushboo said on her daughter Anandita’s birthday, “There is a bundle of joy and excitement. As the name implies, you bring joy every day of our lives. Happiness overflows in you every moment. I love you, my toy baby,” and attached some photos in it. It is also worth noting that Anandita has lost oodles of weight in that photos. Thus, fans are posting comments and liking it as another level of transformation and applauding her efforts.

My bundle of happiness and energy. Just the same as what your name #Anandita means. You bring only joy at every moment , right from the time you walked into our lives. Mmmmuuuaaahhh I love you my bommai kutti #HappyBirthdayAnandita ❤❤❤💝💝💝🎂🎂🎂🎂😘😘😘😘😘😘😘 pic.twitter.com/iKVPdoDKL7