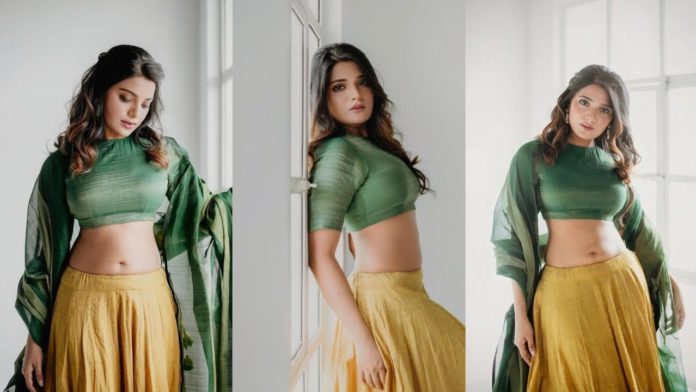 Actress Aathmika is one of the upcoming actresses in Tamil cinema. She wowed fans by starring in the movie Meesaya Murukku and is acting in few movie movies, including a movie with Vijay Antony. She is also acting with Udhayanidhi Stalin in the movie ‘Kannai Nambathe.’

She has also acted in the Tamil film ‘Kaatteri’. Aathmika is also awaiting the release of Aravind Swamy starter Naragasuran. Aathmika has a huge fan on social media, where she posts photos and videos of her workout, daily social life, and photoshoots.

Aathmika kept her fans engaged during the lockdown by sharing photos from various photoshoots. Her recent photoshoot has shocked the fans as she has transformed herself into a glamorous diva. Aathmika is seen in a green dress in this photoshoot, and for the first time, she has worn a dress showing her midriff.

Aathmika’s stunning look showing off her navel is currently going viral on social media. Fans are awed by this look and are liking and appreciating her sizzling photos. Now they are eager to see her in such glamorous avatars in movies.

Here are the photos: