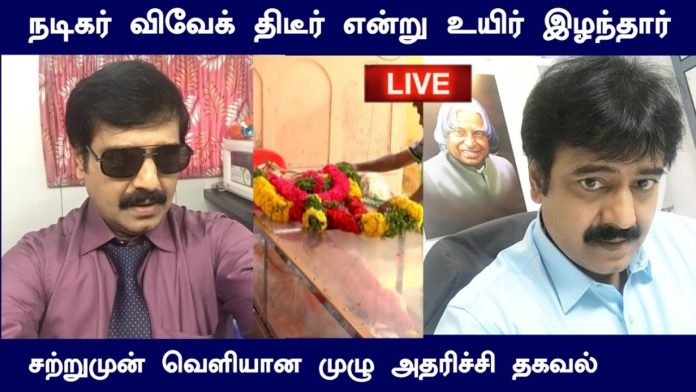 Popular comedian Vivek was admitted to hospital yesterday due to a heart attack. Doctors said in a statement yesterday that his condition was “worrying” and that he was being treated with the help of equipment, including an angiogram and ECMO.

Following this, many, including the political leaders of the Kollywood film industry, prayed for him on his speedy recovery. The news that actor Vivek, admitted to the hospital due to chest pain, died due to cardiac arrest has shocked everyone.

He died at 4:35 a.m. today, hospital sources said. The Kollywood port is in a state of shock due to the news of actor Vivek’s demise.

The famous comedian was admitted to the hospital due to a heart attack yesterday and died suddenly this morning, hospital sources said. Vivek’s demise has shocked the movie industry, and many Kollywood celebrities and fans have been posting condolences on their social networking sites in the wake of his demise.

Can't believe the news 😭 #RIPVivek Sir .. Your thoughts about society will remain with us always .. 💔 pic.twitter.com/KAfOmwKuMM

Not able to believe this… He made us laugh, he educated us through his performances, he cared for this world and helped teach us how to take care of it.
There will never be another like you sir.
We will miss you.
Rest in peace @Actor_Vivek sir#ripvivek pic.twitter.com/3JXfRkn3T2

One of the Best actor..
Rest In Peace Vivek sir 💔🙏🏻#RIPVivek
pic.twitter.com/oqqRF4AbGf