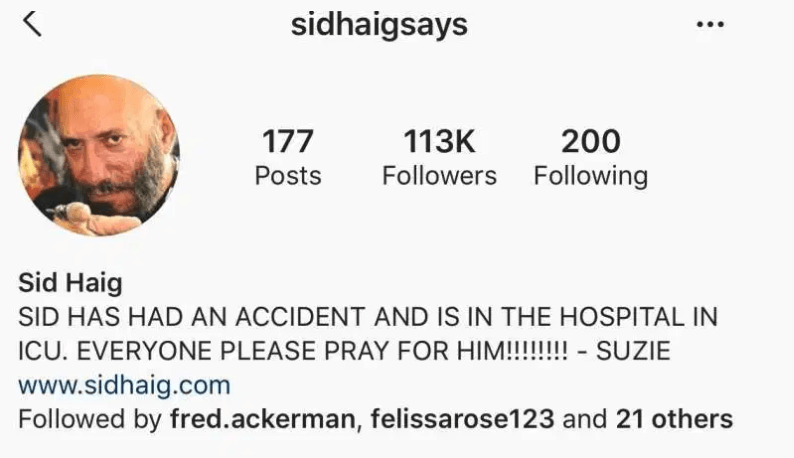 There were various social media reports about legendary actor Sid Haig who is admitted in Intensive Care Unit, there are reports that the actor is dead which is prevailing on social media. But his wife Susan Oberg has officially stated on his instagram page that he is alive and in ICU. Here is what she has to say “SID HAS HAD AN ACCIDENT AND IS IN THE HOSPITAL IN ICU EVERYONE PLEASE PRAY FOR HIM!!!!!!!! – SUZIE” Let’s from TheNewsCrunch pray for his speedy recovery.


Now the BIO has been changed to “Update coming soon. That is all for now. Please pray. Thank you all.”. So as of now Sid Haig is alive and we hope he recovers from ICU. The day before the news that Haig had an accident, the trailer for Rob Zombie’s “3 From Hell” dropped. The movie hits on September 16 and will only be in theaters until September 18. Sid Haig plays the role of Captain Spaulding in the upcoming movie. Screen Rant wrote that Haig was the franchise’s “secret weapon. Screen Rant added that Haig was an “electrifying presence, a commanding authority figure, and a menacing titan of terror.”

Here is the trailer of 3 from Hell