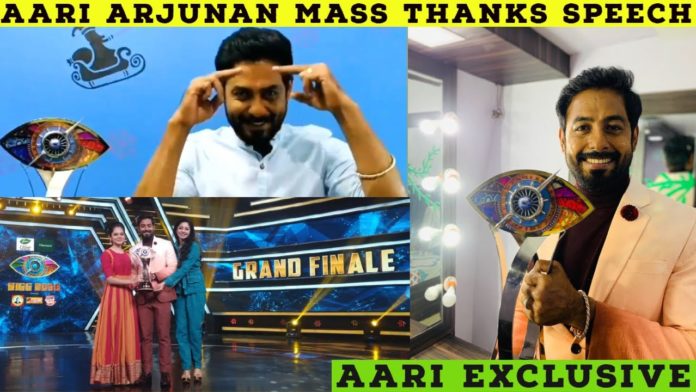 Aari has acted in many films in Tamil, including Aadum Koothu, Rettachuzhi, Maalai Poahuthin Mayakkathile, Highway, Nagesh Thiraiarangam. He also starred opposite Nayanthara in a lead role in the movie Maya directed by Aswin Saravanan. He changed his name to Aari Arjunan last year.

He was part of Bigg Boss season 4 Tamil, aired on Vijay TV, and was well received by the fans. The Bigg Boss finale featured Aari, Bala, Rio, Som, and Ramya Pandian. In the end, Aari Arjunan took first place, and Bala took second place. Actor Kamal Haasan said that Ari, the winner of the Big Boss title, got 16 crore votes, and Bala got 6 crore votes.

Aari received a prize of Rs 50 lakh. Fans have been congratulating him since then. In this case, he has signed on for a new film. In it, he plays a police role for the first time. Debut director Abin is directing the film. Co-produced by Shawriya Productions Subbaiah and Opin Film Factory.

Vidya Pradeep plays the heroine of this movie. This investigation crime thriller movie also has Munishkanth. The first phase of filming is set to begin in Chennai and occur in cities including Madurai, Dindigul, and Palani. PV Karthik does the cinematography. Vivek writes the lyrics for songs.

Ari has been committing to several new films following the success of the Bigg Boss show. Fans have been commenting that Aari, who has won the fans’ admiration, will have many more wonderful opportunities.

With All your Blessings My Next Film Pooja Done Today With Director Abin 😊Thankyou @ARMurugadoss sir #Aari #AariArjunan pic.twitter.com/LwSsaACPIT