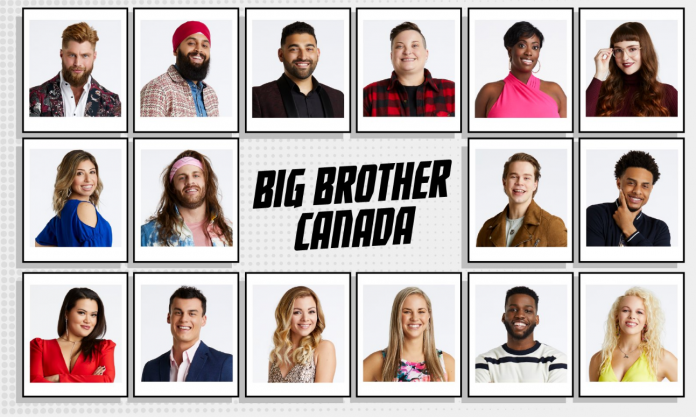 On Wednesday, the 26th of February 2020, the much anticipated houseguests cast reveal for Big Brother Canada Season 8 took place. The premiere of Big Brother Canada 8 is scheduled to take place on the 4th of March 2020 at 7PM ET.

BB Canada 8 will feature an extended season of two more weeks. The contestants will face the biggest test of their lives. The Big Brother Canada Season 8 cast is a wonderful blend of 16 contestants from all across Canada. The makers of BB Canada 8 from Global promised that the upcoming season is going to be a bigger and better show when compared to the previous seasons.

The audience of BB Canada 8 will have the opportunity to vote for the first eviction of this season until February 29. The voting can be cast on bigbrothercanada.ca.

The first episode of Big Brother Canada will air on Wednesday, March 4 at 7 p.m. ET/PT.

The winner of Big Brother Canada Season 8 will be awarded a grand prize of $100,000; $10,000 worth of groceries courtesy of Summer Fresh; and an unforgettable trip for two anywhere in the world from Expedia.

About: As the first Canadian Sikh on #BBCAN, this caring husband and father wants to play an honest and integral game, but watch out for his competitive side.

About: Confident and competitive, Jamar plans on winning as many comps as he can to become a #BBCAN legend.

About: John Luke may seem like a laidback, carefree guy, but don’t peg him for a floater. This extremely athletic scholar plans to downplay his intelligence by outsmarting the houseguests.

About: This 10-time National Powerlifting Champion may look like an alpha male at first glance, however this husband and father of two has a sensitive side that may affect his game.

About: This bubbly animal lover plans to persevere through each competition, using her competitive mentality and never giving up.

About: With Special Forces Selection training, this proud military infantryman plans to use his athleticism, intellect, and charm to take down the house and be the last houseguest standing.

About: This feisty world-traveller isn’t afraid of taking any risks but plans on using her social skills to build a reliable and trustworthy alliance.

About: A long-time lover of BBCAN, Nico is here to put the super in superfan! This charismatic sales manager plans to balance staying out of the spotlight while using his charm to become a superstar houseguest.

About: This OR nurse is a social butterfly and will have no problem maintaining a persuasive game.

About: This professional wrestler believes he has the full package to win Big Brother Canada with his killer combo of physical, social, and mental strength.

About: This petite firecracker plans to rely on her social skills at the start, and then pull out the comp wins as she gets further in the game.

About: This proud lobster fisherman is excited to represent P.E.I. and plans to trap the houseguests into underestimating her mastermind abilities.

About: Coming from a family of over 70 people, this outgoing communications officer plans to soak up every moment of the BBCAN experience.

About: This intelligent and adventurous social support worker knows how to thrive under chaos and believes her fellow houseguests will underestimate her social game.

About: This loyal, fun, and unpredictable disability caregiver is one tough cookie who will have no problem backstabbing an alliance but will remain true to her ride-or-die.

About: Both brains and brawn, Chris believes he has the right balance of intellect and strength to influence the house and win the game.